8:10 – A Feminist passed by and asked my why I didn’t not make a snow woman 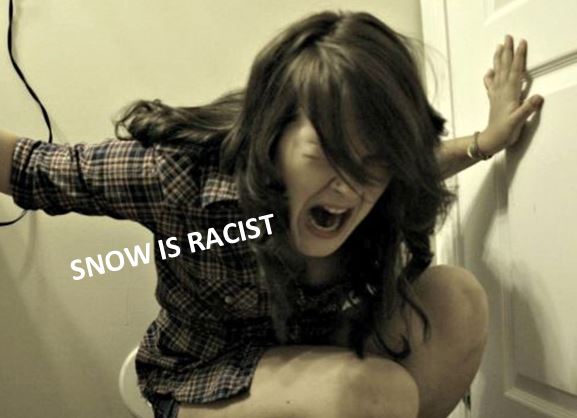 8:20 – The gay couple living nearby threw a hissy fit and moaned it should have been two snow men instead.

8:22 – The transgender man…woman…person…asked why I didn’t just make one snow person with detachable parts.

8:25 – The vegans at the end of the lane complained about the carrot nose, as veggies are food and not to decorate snow figures with.

8:28 – I am being called a racist because the snow couple is white.

8:31 – The Muslim across the road demands the snow woman wear a burqa.

8:40 – The Police arrive saying someone has been offended.

8:42 – The feminist neighbor complained again that the broomstick of the snow woman needs to be removed because it depicted women in a domestic role.

8:43 – The council equality officer arrived and threatened me with eviction.

8:45 – TV news crew from the ABC station shows up. I am asked if I know the difference between snowmen and snow-women? I reply, “Snowballs” and am now called a sexist.

9:00 – Now I’m on the News as a suspected terrorist, racist, homophobic, sensibility offender, bent on stirring up trouble during difficult weather.

9:10 – I am asked if I have any accomplices. My children are taken by social services.

9:29 – Far left protesters And Muslim ‘immigrants’, offended by everything, are marching down the street demanding that I be beheaded.

Moral? There is no moral to this story. It’s just a view of the world in which we live today…and it is only getting worse and worse.

Laugh At This:  Politics Explained
Posted in Democrats and tagged Democrat, Liberals.