ISRAELI P.M. B. NETANYAHU responds to a disgusting gesture with utter class 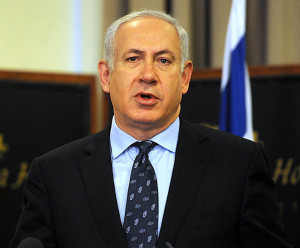 Netanyahu received an item from the leader of HAMAS. During the recent cease-fire, the leader of the Palestinian terrorist organization Hamas, Khaled Mashal, sent a “gift”..(actually, it was a gesture of hate and contempt to the Prime Minister of Israel Benjamin Netanyahu), in an elaborate box with a note. After having the box checked for safety reasons, Prime Minister Netanyahu opened the box and saw that the content was cow dung. He opened the note, handwritten in Arabic by Mr. Mashal, which said, “For you and the proud people of the Zionist Entity.”

Mr. Netanyahu, who is literate in Arabic, pondered the note and decided how best to reciprocate. He quickly did so by sending the Hamas leader an equally handsome package, also containing a personal note. Mr. Mashal and the other leaders of Hamas were very surprised to receive the parcel and opened it, very carefully, similarly suspecting that it might contain a bomb. But to their surprise, they saw that it contained a tiny computer chip. The chip was rechargeable with solar energy, had a 1.8 terabyte memory, and could output a 3D hologram display capable of functioning in any type of cellular phone, tablet or laptop. It was one of the world’s most advanced technologies, with a tiny label, stating this item was “Invented and produced in Israel .”

Mr. Netanyahu’s note, personally handwritten in Arabic, Hebrew, French, and English, stated very courteously… “Every leader can only give the best his people can produce.”