An American, an Israeli, and a Palestinian are marooned on a desert island. 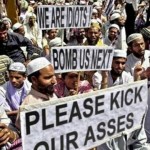 The American goes to one side of the island and builds a church.

The Israeli goes to the other side of the island and builds a synagogue.

Q: Why is there so much food at a Muslim wedding?

A: Muslim Women’s Rights.
———-
Q: In an apartment building in London, Ahmed lives on the first floor, Mustafa on the second floor and Harry on the third floor. The building explodes – who lives?

A: Harry of course – he was at work.
———-
Q: A Pakistani, a Turk, and a Moroccan are riding through Germany – who’s driving?

Q: Did you hear about the winner of the Islam beauty contest? A: Me neither.

Q: What is the most popular kids show in the Middle East?

A: Dora the Exploder!

Q: What do you call a Muslim stripper?

A: They mark the camels that kick.

Q. What can the Palestinians do to raise the average IQ in the West Bank?

Mohammed heard one of his wives was leaving him, so he rushed home where he found her on the carpet in front of the tent with her belongings; he sat beside her and said,“I heard you were planning to leave me?”
She replied,“Yes, I heard your other wives saying you were a pedophile!”
Mohammed thinks for a minute or so and then responds,“that’s a mighty big word for a 6 year old.”

Q How many Muslims does it take to change a lightbulb?
A: None, they prefer to sit in the dark and blame it on the Jews.

Q: Why do Muslims smell like piss?
A: So blind people can hate them too.

Laugh At This:  Mossad Vulture
Posted in Islam and tagged Islam, Muslims.