Q: Do you know what the secret of an islamic marriage is? 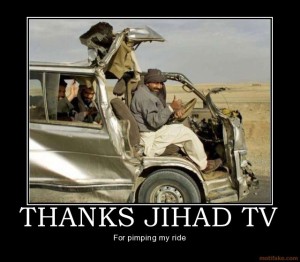 A: The man get’s to see a striptease every night.

Q: How does every Islamic joke start?

A: By looking over your shoulder.

Q: What’s the difference between a Muslim and a vampire?

A: At some point the vampire will stop being bloodthirsty.

A: Mike Tyson can take a shot to the head.

Q: How does a Muslim close the door?

Q: Did you hear about the Catholic Iraqi?

A: He was a Shite Muslim.

Q: How do you play Taliban bingo?

Q: What do you call a drunken Muslim?

Q: What do you call an evil Muslim?

Q: How did you get out of Iraq?

Q: What do you call a Muslim on a toilet?

Q: A muslim, a socialist, and a communist walk into a bar.

Q: Why are they clueless in Saudi Arabia?

A: Cause they live under Iraq.

Q: “What do you call a Muslim shrink?

A: Don’t put your contact info on the Playstation Network!

A: Why should he when he can get bombed at home?

Q: What do you call a Muslim who loves to shop?

Q: Why does Iraq smell so bad?

A: Because they have alot of gas.

Q: What do Muslim men do during foreplay?

A: Tickle the goat under the chin.

Q: What do you call a Muslim taking a bath?

Q: What do you call a Muslim woman with an opinion?

A: Anything you want she’s already been stoned to death.

Q: What do you call a Muslim alcoholic?

Q: What do you call a terrorist attack in the Middle East?

Q: Why did the radical Muslim go to the airport and blow himself up?

A: He wanted to go everywhere.

Q: What should Iraq get for its air defense system?

Q: Why don’t they teach Driver’s Ed and sex education on the same day in the Middle East?

A: They don’t want to wear out the camel.

Q: Why aren’t there any Walmarts in Afghanistan?

A: Because there is a target on every corner.

Q: What did the warning label on the suicide bombers vest say?

A: In case of Jews, pull cord tightly!

Q: What do you call a building full of Taliban?

Q: What’s the difference between a microwave and a Islamic extremist?

A: A microwave doesn’t blow up every time the timer goes off.

Q: What do you call a Muslim looking for a toilet?

Q: What do you call an unemployed Muslim?

Q: What do you get when you cross American culture & Islam?

Q: What do you get if you cross Islam and Capitalism?

A: No more jokes about the profit.

Q: What do Tehran and Hiroshima have in common?
A: Nothing, yet.

Q: What’s big and round and hates muslims?
A: The whole world.

I went to a Muslim birthday party last night. Damn if that wasn’t the fastest game of Hot Potato I’ve ever seen!

Ramadan, putting the slim, back into Muslim.

In Mumbai, a man is going to jump off the building. Up rushes good Hindu cop to talk him down. Cop yells up to the man “Don’t jump! Think of your father” Man replies “Haven’t got a father; I’m going to jump.” The cop goes through a list of relatives, mother, brothers, sister, etc. Each time man says “haven’t got one; going to jump.” Desperate the cop yells up “Don’t jump! Think of Lord Krishna” Man replies “Who is that?” Cop yells “Jump, Muslim! You’re blocking traffic!

Three men want make phone call from Hell to remind to their relatives about its harsh conditions Their Nationalities were American, Italian and Iraqi.

LASTLY an Iraqi made a call and the Devil made him to pay a cent. Both the American and Italian complain as it is not fair and the devil responded to them “The Iraqi call was a local call whereas your was an International call”

Laugh At This:  Pelosi: Pass The Bill So You Can Find Out What's In It
Posted in Islam and tagged Islam, Muslims, Terrorist.

How to Make a Muslim