—Captain Schettino was trying to impress a blonde named Domnica with drinks when disaster struck. When Schettino asked how she preferred her drink she replied, “On the rocks.“ 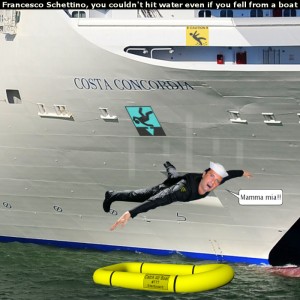 —-From the passenger cruise ship the Costa Concordia, everyone can see a long bearded man on a small island who is shouting and desperately waving his hands. “Who is it?” a passenger asks the captain.

The cruise ship captain Schettino replied, “I’ve no idea. Every year when I pass with this ship, he goes nuts.

—-As a result of a crash into some rocks the overbearing and arrogant captain was forced to see a psychiatrist by order of the commodore.

As soon as the captain Schettino became comfortable on the couch, the psychiatrist began the session by asking the captain, “Why don’t you start at the beginning?”

Captain Schettino said, ” Okay. In the beginning I created heaven and the earth……

—-Once upon a time there was a Cruise Ship captain Schettino. Schettino for years guided a giant cruise ship all over the world. He was admired by his crew and fellow captains.

However, there was one thing different about him . Schettino Every morning he went through a strange ritual. He would lock himself in his quarters and open a small safe. In the safe was an envelope with a piece of paper inside. He would stare at he paper for a minute, then lock it back up. Afterwards, he would go to the bridge.

For years this went on, and his crew became very curious. Was it a treasure map? Was it a letter from a long lost love? Everyone speculated about the contents of the strange envelope. One day the captain sunk the ship off the coast of Italy. His colleagues searched in the captains quarters in the final moments before it sank.

They quickly opened his safe, got the envelope, opened it and… The first mate turned pale and showed the paper to the others. Four words were on the paper; two lines with two words each:

—-Dead ahead, through the pitch-black night, captain Schettino sees a light on a collision course with his cruise ship the Costa Concordia.

He sends a signal: “Change your course ten degrees east.”

“Change yours ten degrees west,” comes the reply back.

“I’m a seaman second class,” the next message reads. “Change your course, sir.”

“I’m a lighthouse on some rocks. Your call.”

—-Captain Schettino: I Wasn’t Abandoning My Ship, I Just Tripped And Fell Into A Lifeboat and Couldn’t Get Back Out. “I had no intention of escaping, but took it as a sign that God wanted me to live.”

—-The Blond Moldovan called a siren of the seas, lured the Capitan onto the rocks. Then to an eventual jobs as gondola capitan in Venetian hotel in Las Vegas.

—-Capitan Schettino”Bring me my red shirt!”.

The Crew asked “Sir, why did you call for your red shirt while on the bridge?”.

Schettino, giving the ensign a look that only a captain can give, exhorted, “If I am cut or wounded from bouncing around the bridge , the red shirt does not show the wound and thus, you men will not be afraid”. The men sat insilence marveling at the courage of such a man.

As sunset came the that night, the lookout screamed that there were rocks ahead. The men became silentand looked to their Captain for his usual comman. Captain Schettino, yelled, “Bring me my brown pants!!

Laugh At This:  Between The Lions
Posted in Freedom and tagged Europe.

Question: What would a Republican primary be without the national media scheming to destroy one of the candidates? Answer: A...