I was traveling between West Palm Beach and Boca Raton the other day (south of Jupiter) in Florida, when a tire blew out. Checking my spare, I found that it, too, was flat. My only option was to flag down a passing motorist and get a ride to the next town.

The first vehicle to stop was an old man in a van. He yelled out the window, “Need a lift?”

“You a Republican or Democrat,” asked the old man.

“Well, you can just go to Hell,” yelled the old man as he sped off.

Another guy stopped, rolled down the window, and asked me the same question. 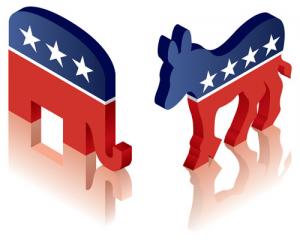 The driver gave me the finger and drove off. I thought it over and decided that maybe I should change my strategy, since this area seemed to be overly political and there appeared to be few Republicans. The next car to stop was a red convertible driven by a beautiful blonde. She smiled seductively and asked if I was a Republican or Democrat.

“Hop in!” replied the blonde.

Driving down the road, I couldn’t help but stare at the gorgeous woman in the seat next to me, the wind blowing through her hair, perfect breasts and a short skirt that continued to ride higher and higher up her thighs.

Finally, I yelled, “Please stop the car.” She immediately slammed on the brakes and as soon as the car stopped, I jumped out.

“What’s the matter?” she asked.

“I can’t take it anymore,” I replied. “I’ve only been a Democrat for five minutes and already I want to screw somebody.”

Laugh At This:  A priest is being honored at his retirement dinner
Posted in Democrats and tagged Breasts, Democrat, Freedom, Girls, Republican, Sex.