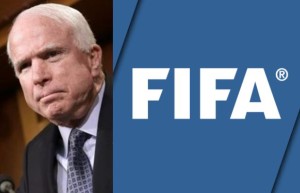 WASHINGTON (The Borowitz Report) – Calling the Obama Administration’s actions against the soccer organization “weak and ineffective,” Senator John McCain on Thursday proposed military action to “dismantle and destroy FIFA once and for all.”

McCain said that he was “completely unimpressed” by the Department of Justice’s arrests of several top FIFA lieutenants this week, calling the action “the kind of Band-Aid solution that this Administration, sadly, has become famous for.”

“Rounding up a few flunkies in a hotel is meaningless when the leader of FIFAremains at large,” he said. “I will follow Sepp Blatter to the gates of Hell.”

McCain requested a four-billion-dollar aid package for moderate elements within global soccer, and said that the United States should be prepared to put boots on the ground in Switzerland.

Calling the use of force against FIFA “long overdue,” he placed the blame for the group’s alarming growth squarely on the shoulders of the White House. “Barack Obama created FIFA,” he said.

News satire from The Borowtiz Report.

Laugh At This:  Heaviest Element Yet Known to Science Discovered
Posted in Congress and tagged John McCain.

Cajuns; Smarter Than You Think