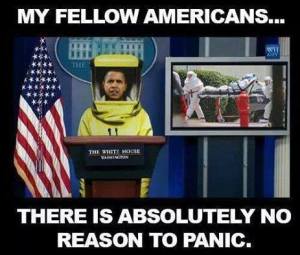 President Obama spoke briefly to reporters after meeting with Ebola leaders at the White House earlier today. He said:

It’s crucial to engage Ebola in dialogue. American citizens need to understand how much we have in common with the virus.

The vast majority of Ebola organisms are peaceful. A tiny minority of extremists has hijacked a great disease and given it a bad name.

Therefore I have signed an executive order directing the CDC to work with moderate elements in the Ebola community to establish a just and lasting healthfulness.

The president declined to take reporters’ questions after making his remarks, saying that he was late for the first tee.

Laugh At This:  How to Achieve Economic Recovery
Posted in Barack Obama and tagged Healthcare, ISIS, Obama.