President Obama goes to a primary school to talk to the kids. After his talk he offers question time. 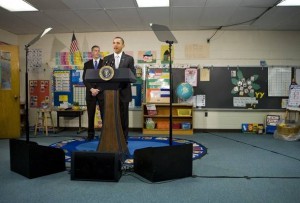 One little boy puts up his hand, and Obama asks him his name.

And what is your question, Walter?

I have four questions:

First, why did the USA bomb Libya without the support of the Congress?

Second, why do you keep saying you fixed the economy when its actually gotten worse?

Third, why did you say that Jeremiah Wright was your mentor, then said that you knew nothing about his preaching and beliefs?

Just then, the bell rings for recess. Obama informs the kiddies that they will continue after recess.

When they resume, Obama says, OK, where were we? Oh, thats right: question time. Who has a question?

Another little boy puts up his hand. Obama points him out and asks him his name.

And what is your question, Steve?

Actually, I have two questions:

First, why did the recess bell ring 20 minutes early?

Second, what the hell happened to Walter?

Remember when Nancy Pelosi said: “We have to pass it, to find out what’s in it” A physician called into...