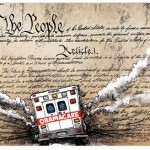 Exhausted and ill from the effort of enacting the Obama healthcare plan, an elderly Senator goes to the doctor. Doctor says, “I have bad news, good news, and bad news, Senator. The bad news is that you only have six months to live. But the good news is that there’s an operation that is 100% successful in curing this illness.” “That sounds great, Doctor,” says the Senator, “but what’s the other bad news?” The Doctor replies, “The Department of Health and Human Services says the first available slot is seven months from today.”

“There was some good news today for embattled Health and Human Services Secretary Kathleen Sebelius.  Obamacare will cover all her injuries after the White House throws her under the bus. She is totally covered.” –Jay Leno

“President Obama told a group of school children that broccoli was his favorite food, and they believed him. Then he told them Obamacare would reduce the deficit and the kids all busted out laughing.” –Jay Leno

“This week will mark the 37th time House Republicans have tried to repeal Obamacare. If Republicans really wanted to do away with Obamacare they should just endorse it as a conservative non-profit and let the IRS take it down.” –Jay Leno

“Obamacare takes effect in less than eight months. Do you realize what this means? If you go to the emergency room now, you’ll be covered by the time you finally see a doctor.” –Stephen Colbert

“Fox News host Bill O’Reilly is writing a new book about the killing of Jesus. It will be the first time Jesus’ death is blamed on Obamacare.” –Conan O’Brien

“The CEO of the Olive Garden blames his company’s low profits on Obamacare – which is odd because most people won’t eat at the Olive Garden until they have health insurance.” –Conan O’Brien

“Mitt Romney has a supporter in Indiana who thought it was a good idea to have the Romney/Ryan logo tattooed on his face. He’ll feel stupid when he finds out about campaign buttons. … I wonder if laser tattoo removal is covered under Obamacare. That would be ironic, wouldn’t it?” –Jimmy Kimmel

“Congratulations to President Obama on being reelected president of the United States. Turns out it is not all bad news for the Republicans. It seems that depression is covered by Obamacare.” –Jay Leno

“I could not wait to start using my Obamacare. Today, I swallowed a fist full of birth control pills and then washed it down with poison. What do I care, it’s free?” –Bill Maher

“Down in Louisiana, Republican Governor Bobby Jindal said he’s just going to refuse to implement Obamacare. That’s it, ‘F**k you all. I’m just not doing it.’ So if you need an operation in Louisiana, you’re going to have to pay for it the old-fashioned way: Stand on a balcony, flash your tits, and hope someone throws you money.” –Bill Maher

“The Obamacare ruling makes Roberts the first Republican to favor an insurance law with an individual mandate since, well, Mitt Romney.” –Jay Leno

“Yesterday, House Republicans held their 33rd vote to repeal Obama’s healthcare law. It was mostly a symbolic vote that accomplished nothing — or as Congress calls that, a vote.” –Jimmy Fallon

“Now that healthcare is guaranteed, I’m frying everything I eat. Fried food and cigarettes.” –Craig Ferguson

“If you’re an illegal immigrant in Arizona hoping to become a citizen so you can get free healthcare, this is the greatest week of your life.” –Jay Leno

#UpdatedObamacareSlogans Take two Aspirin and try logging in in the morning.

#UpdatedObamacareSlogans It’s Like a Stool Sample, We Had to Pass it to See What’s in it

#UpdatedObamacareSlogans because every 27 year old single male should have the right to maternity care.

Laugh At This:  Bill Clinton on Hillary
Posted in Barack Obama, Democrats and tagged Healthcare, Obama.

Got My ObamaCare Packet Today

I wanted to let you know that earlier today I received my "ObamaCare Enrollment Packet” from the White House. It...