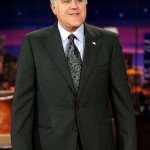 Jay Leno has become increasingly fearless (he must be taking lessons from OldNFO). He’d better be careful. If he keeps this up the IRS will come calling.

“White House officials insist that President Obama knew nothing about the IRS scandal until we all heard about it in the news last week. They said because there was an investigation under way, it would have been inappropriate to tell him. And besides, he was too busy not knowing anything about Benghazi.”

“President Obama announced the appointment of a new acting commissioner of the IRS – the other guy was fired. See, they’re called ‘acting commissioner’ because you have to act like the scandal doesn’t involve the White House.”

“A lot of critics are now comparing President Obama to President Nixon. The good news for Obama? At least he’s no longer being compared to President Carter.”

“A lot of critics are comparing President Obama to President Richard Nixon, which is unfair. Nixon’s unemployment rate was only 5 percent.”
Even Conan O’Brien snuck in a shot.

“President Obama is in a lot of hot water lately. Despite the scandals, 53 percent of Americans say they approve of the job he’s doing. The other 47 percent are being audited.”

Laugh At This:  Obama the Hypocrite
Posted in Barack Obama, Democrats and tagged Obama.