Once upon a time, long, long ago there were two unique lions in the jungles of Africa. Both, it seems, had human-like qualities that made them claim territory, daring the other to cross over the line. Strange as it seems, the boundary between their turf was a well traveled trail through the jungle. 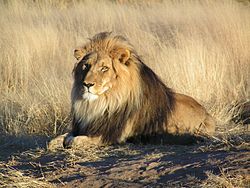 All day every day, both lions lay in the brush staring across the trail at their compatriot, daring him to cross into their territory.

The local natives knew of this animal feud, but all this was unbeknownst to African Jack, a well-known and publicized guide who did not speak Lionese and was unfamiliar with the territory.

While he was leading a safari through the jungle, walking all day and cutting vines with their machetes, all this constant hacking brush had them worn to a frazzle. After seeing two or three of his safari drop from exhaustion, African Jack decided to stop on the trail between these two lions and camp for the night.

After sitting up camp, eating, and getting his safari settled African Jack sat on a stump and began reading. While he was busily engaged in the printed page, the two lions, simultaneously, pounced on African Jack and ate him on the spot.

When the 6 o’clock news heard of the tragedy, they reported, “African Jack killed this evening. The motive is unclear, but it is reported he was reading between the lions.”

Laugh At This:  Why Do Californians Appear To Be So Confused?
Posted in Freedom and tagged Freedom, Humor.

Why Do Californians Appear To Be So Confused?

Have you ever wondered why people in California can appear to be so confused? Consider this: Chief Heather Fong (left),...