Mohammad entered his classroom on the first day of school. 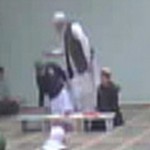 “What’s your name?” asked the teacher.
“Mohammad,” he replied.
“You’re in Australia now,” replied the teacher, “So from now on you will be known as Kevin.”
Mohammad returned home after school.

“How was your day, Mohammad?” his mother asked.
“My name is not Mohammad. I’m in Australia and now my name is Kevin.”
“Are you ashamed of your name? Are you trying to dishonor your parents,
your heritage, your religion? Shame on you!”
And his mother beat him. Then she called his father, who beat him again.

The next day Mohammad returned to school. The teacher saw all of his
bruises. “What happened to you, Kevin?² she asked.
“Well miss, shortly after becoming an Australian, I was attacked by two
fuc%$#@ Arabs.”

Little Kid Lost At The Supermarket In Dearborn, Michigan

At the Supermarket in Dearborn