The prime minister of Israel sits down with Palestinian leader Abbas. At the beginning of negotiations regarding the 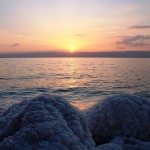 resolution of the conflict.

The Prime Pinister request that he be allowed to begin with a story. Abbas replies, “of course”

The prime minister begins his story: “Year before the Israelites came to the promised land and settled here, Moses led them for 40 years through the desert. The Israelites began complaining that they were thirsty and lo and behold, a miracle occurred and the dead sea was just before them. They swam and did some bathing, including Moses. When Moses came out of the water, he found that all his clothes were missing”.

“Who took my clothes?” Moses asked those around him.

“It was the Palestinians,” replied the Israelites.

“Wait a minute” objected Abbas “there were no Palestinians during the time of Moses.”

“All right” replies the Prime Minister, “ Now that we have that settled, lets begin our negotiations”

Laugh At This:  UN Feeding Israel To Sharks
Posted in Islam, Israel and tagged Israel, Palestinians.

Some women in Saudi Arabia are pushing for rights to drive an automobiles. The Islamic Sharia law has come to...