Q: A car full of Pakistanis and a car full of Somalis are racing down a hill. They both fall off a cliff at the same time, who wins?
A: Civilization.

Q: How do you swat 200 flies at one time?
A: Hit an Ethiopian Muslim in the face with a frying pan.

Q: What do Muslim men think is the best thing about having sex with twenty-eight year olds?
A: There’s 20 of them.

Q: What’s the difference between a trampoline and a Muslim?
A: You should take your shoes off before jumping on a trampoline

Q. Why should they use Muslims instead of laboratory rats in experiments?
A. Muslims breed faster and you won’t get so attached to them.

A Muslim man goes into a drugstore and says to the druggist, “I need some birth control for my eleven-year-old daughter.””Is your little girl sexually active?” asks the druggist.”Nah, she just lays there like her mother. 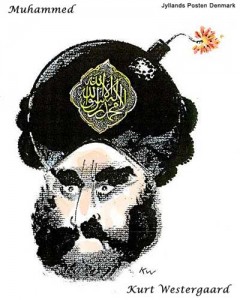 “A cop in London stops a Muslim leading a cow down the street. He asks “What are you doing with a cow in the middle of town?” The Muslim says, “I am taking it home to keep it in my house.” The copper asks, “What about all the flies, the #$%$ and the stink?”The Muslim thinks a moment and replies, “The cow will just have to get used to it.

“Ahmed goes up to his friend Mahmud and asks, “What’s black, blue and yellow and doesn’t like sex very much?”Mahmud shakes his head and says, “I give up – what?”Ahmed answers, “The 6 year old Chinese girl in the trunk of my car.”

Laugh At This:  Liberal, Terrorist, and Obama Cartoons
Posted in Islam and tagged Islam, Muslims.

Most Syrians struggle to even read Arabic, much less have a clue about reading English. So, how do a group...