My husband has a long record of money problems. He runs up huge credit-card bills and at the end of the month,

if I try to pay them off, he shouts at me, saying I am stealing his money. He says ‘pay the minimum and let our

kids worry about the rest’, but already we can hardly keep up with the interest.

Also, he has been so arrogant and abusive toward our neighbors that most of them no longer speak to us.

The few that do are an odd bunch, to whom he has been giving a lot of expensive gifts, running up our bills even more.

Also, he has gotten religious. One week he hangs out with Catholics and the next with people who say the Pope

is the Anti-Christ, and the next he’s with Muslims.

Finally, the last straw. He’s demanding that before anyone can be in the same room with him, they must sign a

loyalty oath. It’s just so horribly creepy! Can you help?

Stop whining, Michelle. You’re getting to live in the White House for free, travel the world,

and have others pay for everything for you. You can divorce the jerk any time you want.

The rest of us are stuck with the SOB for two more years! 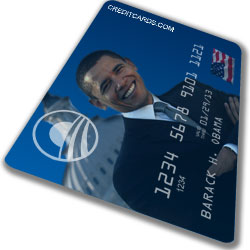 Laugh At This:  Boombox Cartoons by Dixon Diaz
Posted in Barack Obama and tagged Obama.

Mount Rushmore after Obama, They Can't Stand To Look Any More...