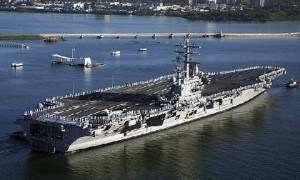 When the Bridge pipes ‘ Man the Rail’ there is a lot of rail to man on this monster: shoulder to shoulder, around 4.5 acres. Her displacement is about 100,000 tons with full complement.

Top speed exceeds 30 knots, powered by two nuclear reactors that can operate for more than 20 years without refueling
1. Expected to operate in the fleet for about 50 years
2. Carries over 80 combat aircraft
3. Three arresting cables can stop a 28-ton aircraft going 150 miles per hour in less than 400 feet 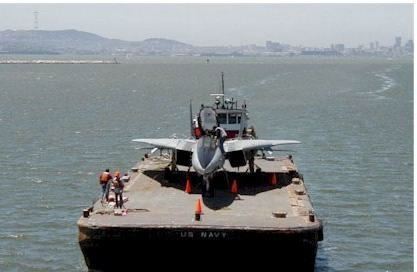 The ship is the first of its kind in the Navy and is a standing legacy to President Bill Clinton ‘for his foresight in military budget cuts’ and his conduct while holding the (formerly dignified) office of President.

The ship is constructed nearly entirely from recycled aluminum and is completely solar powered with a top speed of 5 knots. It boasts an arsenal comprised of one (unarmed) F14 Tomcat or one (unarmed) F18 Hornet aircraft which, although they cannot be launched on the 100 foot flight deck, form a very menacing presence.

As a standing order there are no firearms allowed on board.

This crew, like the crew aboard the USS Jimmy Carter, is specially trained to avoid conflicts and appease any and all enemies of the United States at all costs.

An onboard Type One DNC Universal Translator can send out messages of apology in any language to anyone who may find America offensive. The number of apologies are limitless and though some may seem hollow and disingenuous, the Navy advises all apologies will sound very sincere.

In times of conflict, the USS Clinton has orders to seek refuge in Canada . 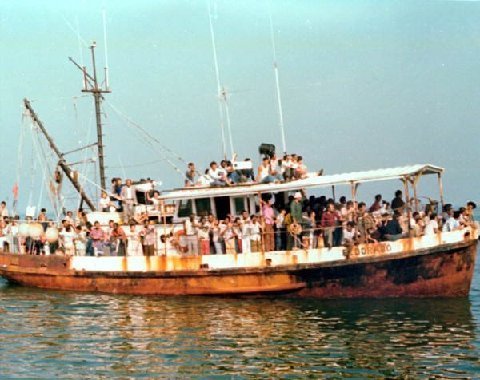 Details are as vague.

Laugh At This:  Joe Biden Is Holding a “Pre- Inaugural Parade” All His Voters Showed Up
Posted in Barack Obama, Democrats and tagged Clinton, Obama.

Someone recently wrote a letter to the White House complaining about the treatment of a captive taken during the Afghanistan...